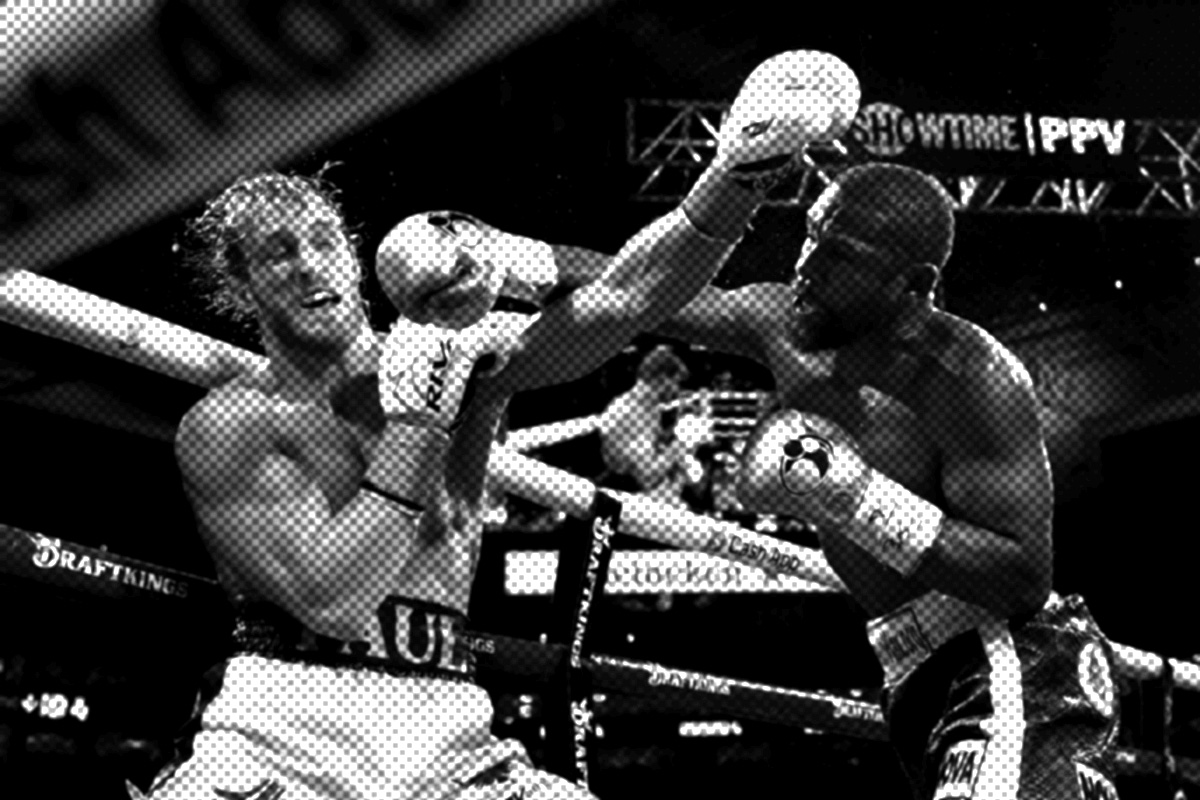 Watching Jake Logan Paul take on Floyd Mayweather in a boxing match is never going to be advisable, but — contrary to all the tsk-tsking — it falls well short of infidelity. Nobody is cheating on MMA to take a look at a spectacle, even if taking a peek costs $50. It is not ruinous to boxing for a couple of entertainers to entertain. If anything, Paul-Mayweather — which took place Sunday night in Miami — was like a fight game lap dance, some skeevy fleeting thing that plays to the lost-in-a-moment jollies of our time.

As Ryen Russillo stated on the Bill Simmons’ pod afterward, everyone has blown $50 in worse ways. So why get so worked up? Why feel the need to dress the word “fight” in quotes, as if anybody really saw it as something altogether real?

This goddamn stupid thing was never meant to be competitive, but the purchase-point of curiosity was…yet what if it is? It was labeled an exhibition, which preserves your right to deem it as meaningless as you want. It was eight rounds with knockouts allowed, a Barnum & Bailey caveat meant to pique curiosity further.

Generally speaking, curiosity is a healthy thing, regardless if it lands in a boxing ring or on a YouTube channel. Curiosity can give us some regrets, sure, but it gives us something to talk about. Curiosity as a collective experience can lead to beautiful bouts of shame, guilt, astonishment and even inexplicable jolts of satisfaction.

It was never anything more than cheap thrills. In fact, the less justifiable it was the better. It was so dumb that it crashed Showtime’s streaming servers. It was Thunderlips versus Rocky. It was Lyle Alzado versus Muhammad Ali. It was as Floyd said in the lead-up, “legalized bank robbery.” We were the cash in the drawer, is all, and Paul was pretending to be the teller.

Though it wasn’t all that easy. Paul had six inches and a couple of weight classes on Floyd, and he gooned it up best he could. He tossed that jab out there and kept hitting the spots where Floyd was before he wasn’t. He draped his hulk on Floyd and melted over his shoulders like a six-foot vanilla candle.

In the fourth round, when Floyd had had enough of the dumb shit and tried to knock his jaw into the club level, Paul bent his frame out of harm’s way and refused the message. A couple of times he got socked and shook it off, which was actually kind of impressive. Though he’d never admit it, Floyd was getting visibly pissed off in there.

It turned into a slog, and that meant a victory — the bout went the distance, and the distance was the only kind of real objective for Paul. He didn’t get knocked out. He lasted until the end. It was very much like Balboa-Creed 1, only it was real (in that it actually took place) and without any redeemable merit. Jake Paul, Logan’s brother, celebrated ringside like he’d just got accepted into Harvard. That would of course never happen, and neither did the thing that he was celebrating. Floyd would say he won. The only real fight is over the narrative.

Who doesn’t want to argue with their own perceptions of what it is they just watched? Stupid fun is still on the spectrum of fun. Even Floyd used that word in the post-fight interview. You tend to have fun like that when you get paid millions just to have a shaggy blonde dude hug you with a thousand creeping limbs. Floyd tells you it’s a waste of money beforehand, and proves it every time. In some ways he’s the most honest promoter in the world.

But the fact that it happened at all isn’t doomsday for the MMA diehard or the boxing purist. Even with the circus tents popping up around them, those sports will be fine. Gimmick fights come and go. It’s not an infestation, but — so long as prizefighting is about fighting for money prizes — a mere symptom of the game. If there’s curiosity to be exploited, there will be Jake and Logan Pauls. There will be 44-year old Floyd Mayweathers holding up their legacies to be snatched at. There will be Conor McGregors offering some famous stumblebum a big payday.

It’s just as stupid as you want it to be, but it’s really nothing to get upset over.