As for Saturday’s UFC on ABC matinee, the word that comes to mind: Nullified 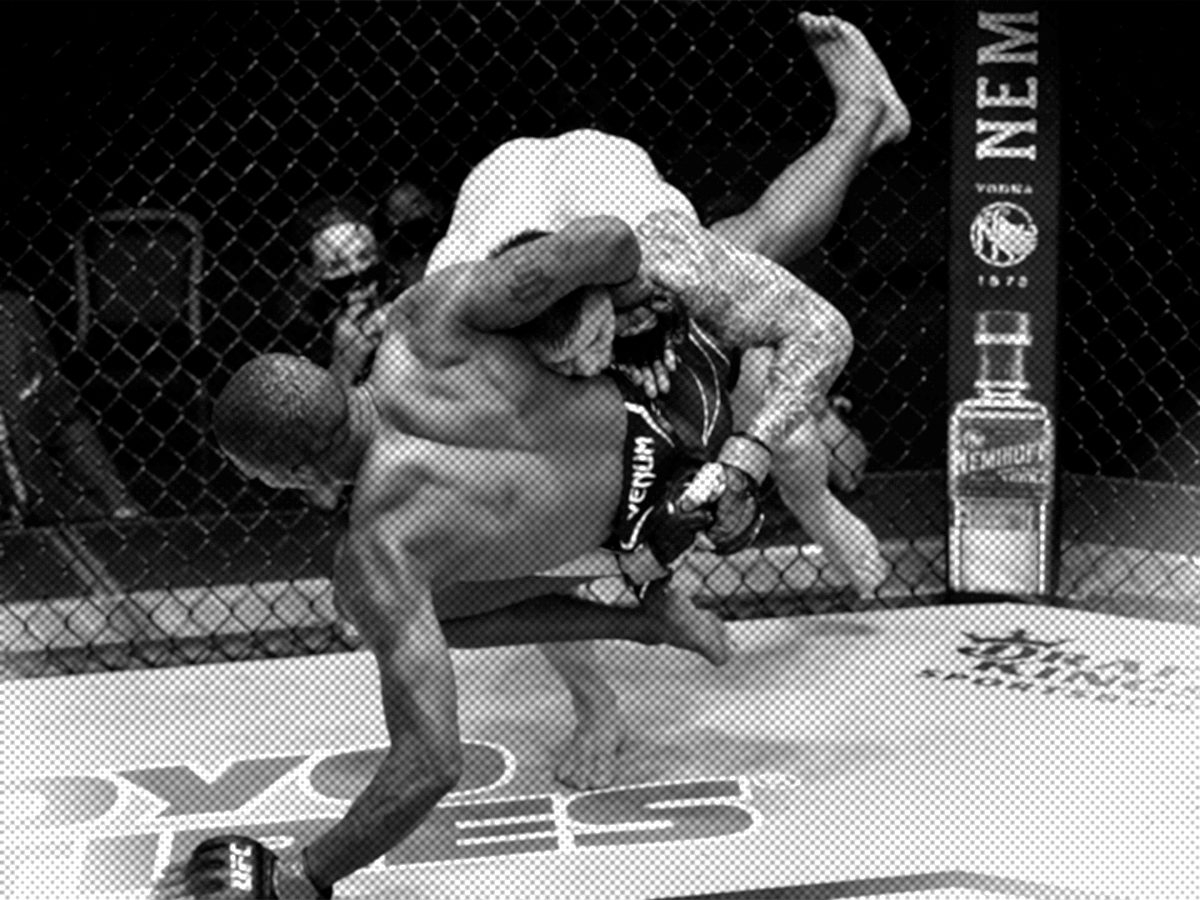 Back in the days when Dana White was actively trying to convince people that fighting was in our DNA he would, on special occasion, roll out the Four Corners Scenario. You know the one. You’re standing at an intersection and on one corner there’s a basketball game, on another a football game, on the third a shell game or a game of horseshoes or something, and on the last corner a fight — which do you stop and watch?

Well, obviously the fight. The other corners are full of people merely passing time. In a fight something fucked up is already in progress. Somebody got on somebody’s nerves, and they’ve blown across the threshold of civility. Ain’t nothing recreational about that. If anything, a fight rips you out of the mundane, just like a car crash or a person falling down a staircase. Potential trauma is like a bug zapper for our attention.

But what happens if somebody in this hypothetical street fight basically nullifies the action by overpowering the other to the ground, repeatedly, for 25 minutes? If a pattern is established and basically you know everything you need to know about how all this is going to end? You (or some other onlooker) might intervene after a couple of minutes and say something like, “Alright, alright, he’s had enough, you proved your point.”

That was the feeling I had watching Kevin Holland, for the second time in three weeks, squirm under the weight of the guy he’s fighting. Three weeks ago it was Derek Brunson, the man with the blueprint on how to beat Holland. On Saturday it was Marvin Vettori, whom Holland was stepping in on short notice to face on national television. It was a bold move, and there was some redeeming intrigue as to how Holland would bounce back after his rather prolix outing against Brunson, but it quickly fell into a helpless pattern.

Holland would come out swinging; Holland would get dumped on his back; Holland would not be able to get back up. Nullified. When a pattern like that breaks out in a sanctioned bout — especially when we just watched this same pattern three weeks ago — 25 minutes can feel more like a sentence than a fight. It felt like we were watching Holland serve some hard time on Saturday, convicted for wrestling room truancy. Oddly enough, intensity tends to diminish when the trauma becomes a vicarious afternoon slog.

It wasn’t ideal. Vettori was supposed to fight Darren Till, a free-yapping Scouser who has far better takedown defense, but an injury forced Till out. Holland, who was coming off a very anticlimactic main event against Brunson and wanted to forget it as soon as possible, stepped in with a renewed focus. Namely, he wasn’t going to talk as much. He was going to muzzle himself a little more and focus on the task at hand, which is to kick some ass.

There used to be a sense of dread surrounding a Jon Fitch fight, because he wanted to grind for 15 minutes and make it a miserable experience for whomever he was facing (and whoever was watching). That style got him an early boot from the UFC, and his name became an adjective for this who slowly drowned under the cement he poured.

To get “Fitched” was to get nullified. The UFC has always had a hard time marketing nullified. They market firepower, like Holland’s. Knockouts. Power. Explosiveness. Audacity!

Of course, it was never really a Jon Fitch problem. Fitch knew how to use his strengths and to take himself out of danger areas in a fight. It was always the job of the guy he was facing to do something about it. Fitch wasn’t an ideal candidate for big main events because he was too good at dictating his will. In these last two fights, Holland hasn’t been a good main event because he can’t do anything about it. He was the A-side against Brunson, which made the nature of the loss that much more glaring. He was the instant redemption story against Vettori, but Vettori made damn sure no redemptions would occur on his watch.

Both guys took away Holland’s danger areas by insisting he fight from his back, which — for a viewing audience — was like throwing a bucket of water over a bunch of fireworks just as the fuse is hissing down towards the show.

It’s smart, for sure. Can’t hate on anybody exploiting a weakness, especially if you’re trying not to lose position in the title picture. Vettori did what he had to, just as Brunson did. But if Saturday’s fight were on one of the street corners in Dana’s go-to hypothetical, after a couple of minutes I’d be checking in on the guy playing horseshoes, if you know what I mean.