Is it the end of Conor McGregor? No, but it might be the end of an aura 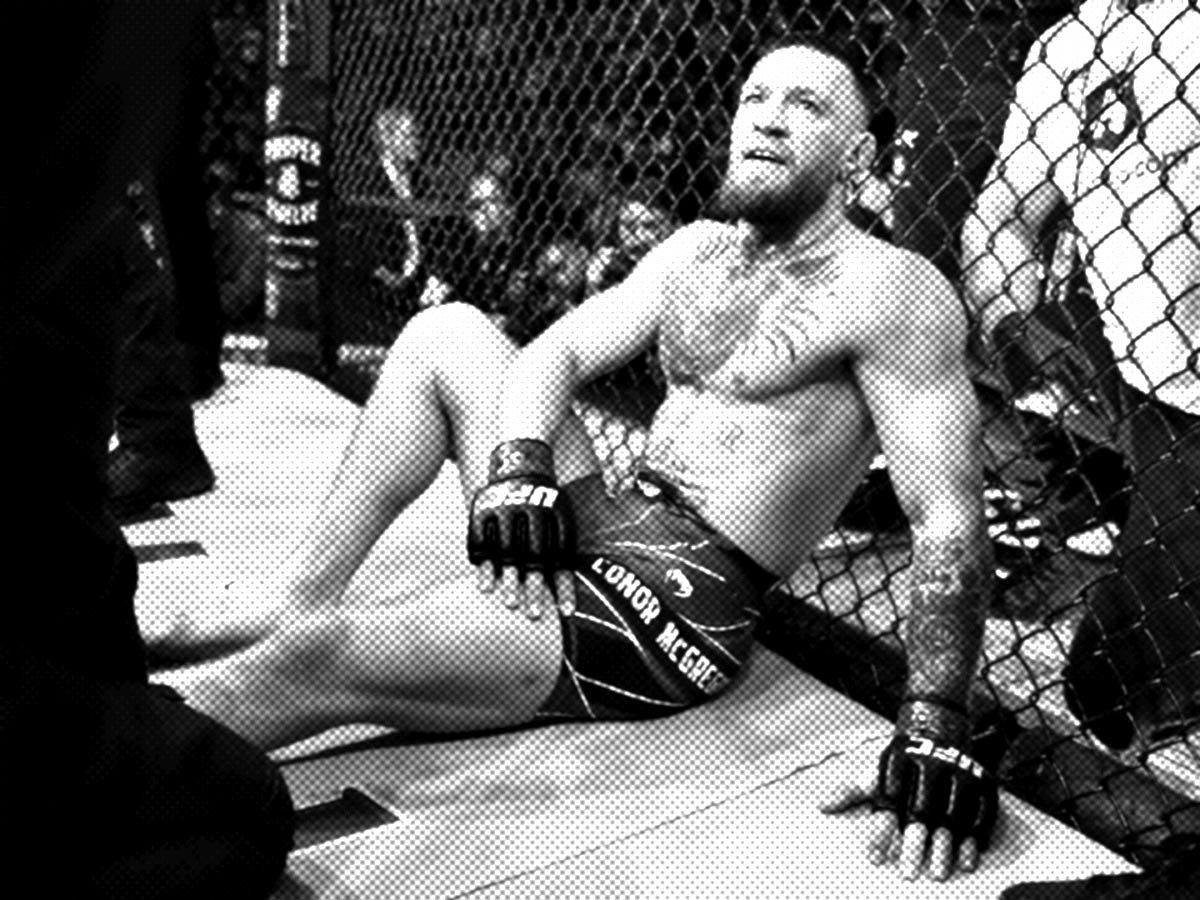 Conor McGregor went into his series with Dustin Poirier a 26-year-old firebrand who everyone just knew was destined for great things. He exits that series, at least for the time being, as a 33-year-old Forbes mogul with a broken leg and some delusions about Poirier’s wife. Everything that’s happened in between has been written about, talked about, debated, scrutinized, spat upon, hailed, pored over, condemned, memorialized, diced into Irish ballads and trimmed with gold.

Was UFC 264 on Saturday night the end of McGregor?

Come on, chief. This man is ubiquity itself. Like it or not, we’re stuck to his every whim. McGregor sat there with his back against the cage and his ankle turned in at an ugly angle, unable to stand or (worse) even really make himself heard, insisting that officials rule the end a “doctor’s stoppage.” Of course it was. He is now free to lobby for a fourth bout with Poirier — the rare fight game quadrilogy — because, as Dana White later agreed, the fight never finished.

Such an immediate declaration felt like a sentence to some fans. It felt only right to others. Conor McGregor remains the exception to every rule. The thing is, no matter what happens with McGregor people are free to argue, and that’s part of the sublime nature of the McGregor Experience as he draws nearer and nearer to the twilight.

Exchanging opinions. Getting worked up. Being exhausted by the exploits and expressing that fatigue to the noobs who’re still into it. Being turned off by the promises of murdering his opponent. Being lured back in by the B-roll, the Mystic Mac era when every exchange was celestial, and all opponents lost themselves in the aura and hype. Those days are over? Those days are over. Poirer — an original victim to all that — really couldn’t have given any less fucks about any of it in 2021.

These days everybody reads differently into the “fuck you” pinstripes. Not everyone cares that he drained his left ear, or the new teeth, or his bike riding in the desert. At bottom, people are hinging more on whether or not he can still win. If, after so many extravagances and riches, there’s still a fighter in there. Does he, as Teddy Atlas tried to will into existence during the pre-fight show out in Vegas, still have that edge? That was a vital part of who he was. Is it part of who he is?

The truth is, Saturday night really was a little inconclusive. Early on McGregor came out with some high kicks, loose, light on his feet and aggressive, very much like he did in 2014. If he was playing the room, he was doing a great job. All those cage-side celebrities were on the edge of their seats.

Then Poirier coolly returned fire, and the warning signs became pretty clear. McGregor jumped a guillotine midway through the first round, which was a curious if not particularly bold mistake. It didn’t work. In fact, it backfired and left McGregor in a place he never wants to be. On his back. Staring up at the massive Jumbotron and dodging incoming elbows.

If he’d have survived the round it was going to be Poirier’s, which wouldn’t have been the end of the world. Back when McGregor was still the lovable Irishman that everyone was rooting for (and Ireland was vicariously living through), he suffered a bad first round against Chad Mendes only to come back and knock him out in the second. That was at the very height of his powers. We’d seen him treat each stage of escalation in his career with something like “transcendence.” Yet we hadn’t seen him persevere like he did against the wrestler Mendes that night. The heart of Conor McGregor went fathoms deep. God was Vegas green.

That was 10 months after he beat Poirier the first time, and just five months before he won the featherweight title with a single punch against Jose Aldo. These accomplishments remain nearly impossible when you really think back on them, though revisionists like to dismiss deez tings as nothing more than a perfect storm. Whichever side of the fence you fall on, there was some magic in the early run. That magic took him a long way, but it’s carried in smaller and smaller pouches to each fight.

Then Saturday happened. McGregor’s shtick was tired. People sensed desperation. Others spotted a try hard. Gone was El Chapo. Gone was Mystic Mac. Gone was the luck of the Irish. McGregor was hanging on before his ankle folded under his weight late in the first round. It was a sad end to a big trilogy. If that hadn’t occurred, would he have come back against a highly skilled cardio monster like Poirier?

Probably not, but see — that’s the rub.

We can’t know. That’s the reason the idea of a fourth fight was immediately activated. McGregor will hover over things while he rehabilitates his leg, and let this latest defeat tear away at his insides. We will hear about much of this. McGregor wouldn’t have been in a trilogy with Poirier if he didn’t care about the UFC title structure. He’d have already segued to Jake Paul if he didn’t care. It still matters.

But does he still matter to it? That was the question all week, and now it’ll be the question for the next year. It’s not the end of Conor McGregor, but 2014 feels like a long, long time ago.