Want to rev up for a potential Derrick Lewis-Francis Ngannou rematch? Don’t do what I did… 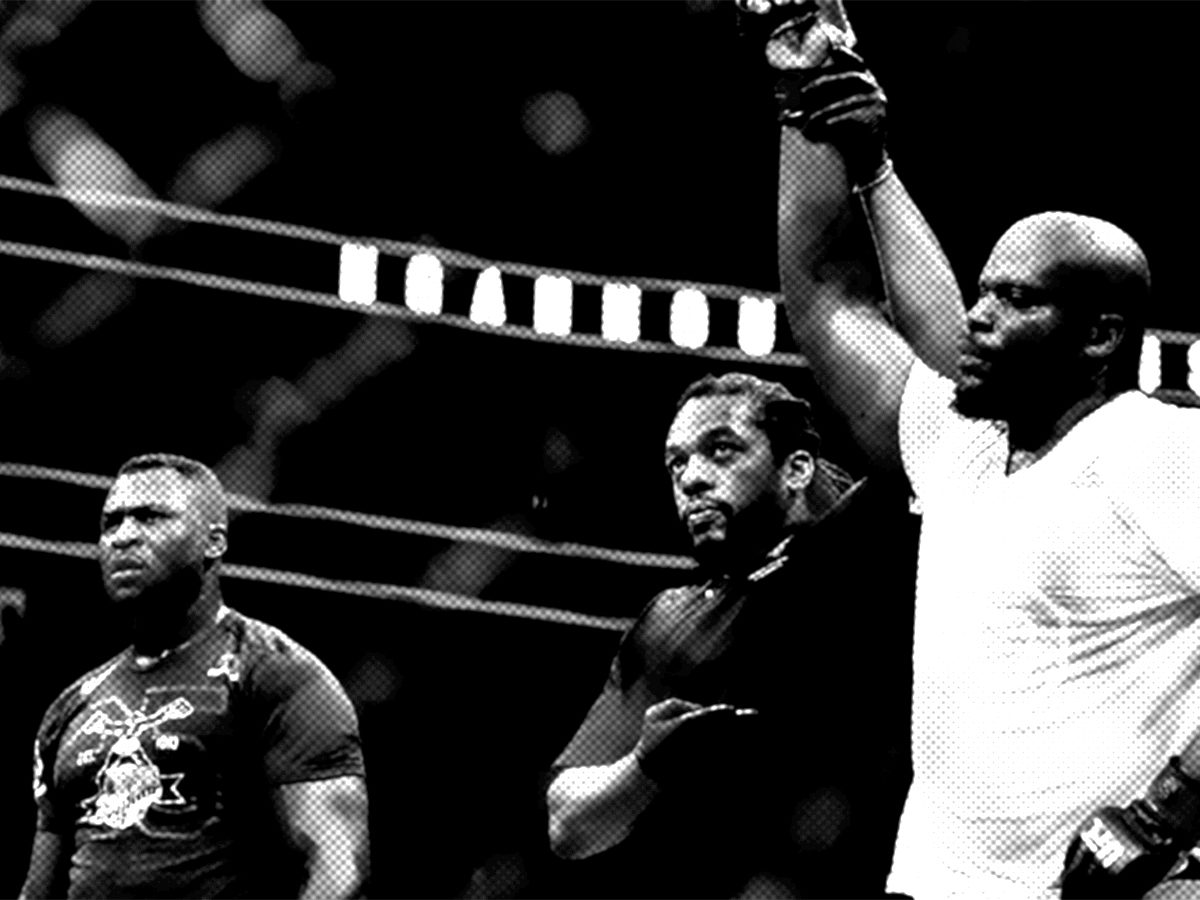 I went back and watched the first fight between Derrick Lewis and Francis Ngannou, which took place during the summer of 2018. I wanted to see if there was a higher kind of performance art in play that we might’ve missed the first time through, something minimalist in nature, perhaps, or so blatantly pacifist as to take on the form of protest.

If you’ve scrubbed that fight from your mind, I really can’t blame you. I tried to forget I ever saw Vanilla Sky the moment I walked out of the theater. But since Dana White is so hell-bent on plugging Lewis into a rematch with Ngannou — just to stick it to that greedy Jon Jones, who’s asking for all that money— it felt timely to remember. To just soak in one of the greatest theatrical duds in heavyweight history. To see if it improved over time.

The answer is no. No it did not.

But I will say that the commentary between Jon Anik, Dominick Cruz and Joe Rogan succeeds in turning a real-time fiasco into a comedy on second watch. Let me spare you from going back and reviewing all that firepower melting slowly in a blazing sun. Instead let me rundown the highlights to get you fired up for the potential rematch.

The anticipation is very high, and most people in the Vegas crowd are trying not to spill booze on their betting slips, thinking a first round finish is forthcoming. You can cut the tension with a knife and serve it on crackers!

“This is a zero margin for error type of match-up,” Joe Rogan says right off the bat. “Either one of these guys can knock any human being into another dimension with one shot.” That’s what we’re talking about. People getting knocked into other dimensions! Meanwhile, Lewis does a full orbit of Ngannou in the Octagon, a satellite with nuclear capability just sizing some shit up. “Ngannou’s very patient here,” Rogan says, still adjusting his weight on a very uncomfortable bed of pins and needles.

About a minute in Lewis and Ngannou throw at each other. Lewis connects slightly, while Ngannou’s looping punch is about two weeks late. It zooms through the place Lewis was a long time ago. The breeze from these blows can be felt in the front row, which cools down those cats who are hyperventilating at the idea of all that power. Then it happens. Time just kind of…turns…into a…Pink Floyd song. Nothing happens. Lewis tries a switch kick at 3:20 mark, which I guess is technically something, but mostly nothing. Ngannou, bouncing, feinting, bobbing, deking, threatening.

Cruz cuts in with an observation. He calls what he’s watching “standing in the mirror,” meaning the guys are looking at each other, sizing up speed and power. If so the reflection is sad. The first boos rain down at around the two-minute mark, as Rogan tries to extract some strategy from the slow mimics circling each other. Is Lewis setting up the counter? Is Ngannou conserving energy?

“If you had told me that through three minutes in the first round that Ngannou never even threw a shot, I’d say your crazy,” Rogan says. “What’s the Vegas odds on that?”

“I do not have that number for you, Joe,” Anik says. “I can tell you a lot of people put money down on this fight not seeing the second round, and we’re a minute an forty seconds away from being there.”

Cruz speculates that Ngannou is scared of getting tired, scared of the exhaustion he felt against Stipe Miocic in his title bid some months earlier. As he says this, Ngannou and Lewis hug like it just occurred to them that this is, after all, a reunion. Love intercedes, if only fleetingly. Cruz assures us that in second and third rounds Ngannou will pick it up, that he’s pacing himself. Then time drips off the clock and Dana White’s face starts turning that color of pink that it does when he’s thinking cuss words really hard.

“There’s a lot of firepower in that cage right now.” Rogan marvels. “And a lot of bullets in the gun, too, not firing nothing.” Cruz admits. The boos have turned hostile as the first round ends, and bettors are wondering, why. Why them? What have they done to deserve this?

Ngannou returns to the center of the cage, and his movements chug back to life like he means business. Yet the drum of circling footfall kicks the trance in again, and we’re right back to rubbing our eyes. Rogan takes the opportunity to tell a little story about his mindset before the fight started all those eons ago. He says he had been telling people that “there’s no way that this fight can be anything but chaos” all week long.

“It’s definitely possible that I was wrong,” he confesses.

If it’s supposed to lighten the mood, it does, but there is no laughter. There is no joy. There are no emotions strong enough to overrule the confusion of this Ultimate Peyote Match. A graphic pops up that Ngannou is 2-of-10 for strikes, after six minutes of fighting. Generously, that same graphic says Lewis has thrown 18 total strikes. These feel like exaggerations. Lies! We’re being duped! The government is behind it!

People start lighting lighters on phones and swaying them from the dark depths of their seats, like Tesla’s playing in the foreground. It’s now the ballad of the heavyweights. A dirge of unspent power. What we’re watching is pay-per-view pickpockets at work. Ngannou dancing, nothing. Lewis circling, nothing. A chant kicks up, “Fight, fight, fight!” “Francis seems completely averse to getting hit,” Rogan says. Cruz is a pillar of mental strength through it all, though. He says he really believes Francis will be firing those big guns come the third round.

Meanwhile, the mirrored images are startled by the sudden reflection of a third. WTF? Oh! It’s referee Herb Dean. He brings them together with a minute to go in the second and warns the fighters that this is indeed a fight, which means they need to engage. The old warning for timidity. Dean, a role player in this conflict, emerges as an unlikely hero in this story. The crowd lets out the biggest roar of the fight. Herb’s the first man of the three to take action! Then the mesmerizing drum of footfall…the trance…Dana’s pink face…feints.

Joe Rogan concedes we may be looking at the most boring heavyweight decision of all time.

“Weird to watch. Weird to see. We might never see that old Francis Ngannou again.” These are the words of a flummoxed Joe Rogan. Total strikes into the third round, 6-of-25 for Ngannou, which doesn’t compute. It can’t compute. It won’t! This is the guy who was flattening everybody not all that long ago. Free-swinging Franny. Scariest heavyweight of all time.

Rogan mentions that the record for the least amount of strikes landed in a full fight is 23, and that right now this fight — this mirror of swaying giants — has produced only 20. The last time it happened it was an “old school fight with Jens Pulver,” Rogan says. There have been a thousand bad fights since then, and now we’ve arrived at the worst of the worst.

“What the hell” he asks the air at one point, during a moment of pure stupefying quiet. “This feels like it should be a double loss.” There are four minutes left. Then three. Then 80. Lifetimes. The guns are holstered and ain’t coming out. Those guns will recline on psychologist’s chairs later on, but right now this thing must play out. It has to end. Then we can find out if somebody’s going to win, and if so, who?

Inside 30 seconds they exchange, with Lewis landing some knees. This gives Anik a chance to raise his voice from the apologetic tone he’s been keeping. It doesn’t lead to much though. The boos are now deafening. Ngannou finally unloads, landing a single strike right after the horn. It’s his biggest blow of the night, and it just so happens to be illegal. The crowd lets him know what they think.

The commentators deem it the worst heavyweight fight of all time, and Anik calls it like it is. “I don’t envy our replay guys here trying to find highlights to show you.”

The final stats: 33 total strikes landed. 22 for Lewis, 11 for Ngannou.  Lewis won the fight on the scorecards, getting a unanimous decision. Meanwhile everybody else was doing everything in their power to forget. To make it go away. All it took was for Jon Jones to ask for some money to bring it all back up. Maybe the second fight will be better.

But if you want to get excited about it, don’t do what I did and go back and watch the first.